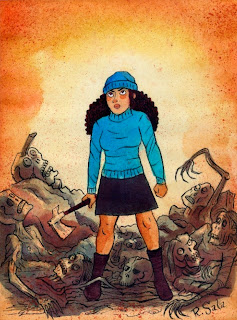 Colleen is a normal college student who is thrown into an extraordinary and terrifying situation - nothing less than the end of the world as we know it.

When mankind is attacked and nearly destroyed by grotesque creatures calling themselves "The New People," Colleen - facing horrors beyond her worst nightmares - rises to the occasion and survives, heroically persevering, even when all seems lost.  (See THE HIDDEN).

After the events chronicled in THE HIDDEN take place, she makes an uneasy alliance with the man who is actually to blame for the worldwide disaster, Victor Frankenstein.  Although she secretly plans to kill him when the moment is right, the two rely on each other to survive in the desolate "New World" and have a number of adventures together.

At one point they learn that Victor's creation, also named "Frankenstein," had been attempting to build a time machine - and they wonder if this could be the key to humanity's salvation.
Posted by richard sala at 1:39 AM