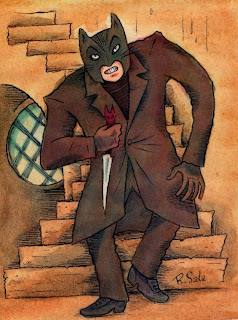 Although the actual identity of The Creeping Cat remains a mystery, some details about the life of this ruthless, methodical killer have come to light.

There was once a group of vigilantes known as The Fellowship of The Creeping Cat.  The masked members of this secret society regularly took the law into their own hands.  Criminals who, for one reason or another, remained beyond the grasp of the law, were executed ~ gunned down in the street.

Then one night things went tragically wrong and a young husband and wife were caught in the crossfire.  Because innocent blood had been spilled, the remorseful fellowship voted to disband forever.

However, there was an orphan involved, and evidence suggests that years later, the now grown child returned, seeking revenge.  In the guise of The Creeping Cat, he hunted down and killed all of the former members and (in the event that they were already deceased) their children.

According to official police records, authorities concluded that a failed poet named Avery Finch was the masked killer.  However, readers of Avery's private journal know better.

(See: The Fellowship of the Creeping Cat in the book MANIAC KILLER STRIKES AGAIN)
Posted by richard sala at 1:36 AM