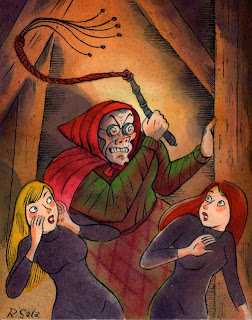 The vile, black-hearted, monstrous Mother Claude was a high-ranking member of a secret organization of criminals known as The Obtainers.  She ran one of their largest orphanages ~ which were actually schools where children were raised from infancy to be expert thieves, pickpockets and cat burglars.

The children were terrified of disobeying her and those who did learned that she took a sadistic glee in their punishment.  She promised those who longed to escape that they never could because The Obtainers were everywhere and would catch up with them eventually.

When a great fire consumed the orphanage, Mother Claude was officially declared dead.  However, many of the children refuse to believe she really died in the fire and swear they have seen her peering in their windows at night.

(See: CAT BURGLAR BLACK)
Posted by richard sala at 1:26 AM