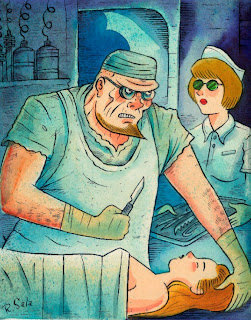 
Once a respected surgeon, Dr. Trepan had his medical license revoked due to some questionable operations and experiments on the human brain.


Eventually he became the director of a private asylum where he was able to secretly continue his forbidden research.
It was Dr Trepan who was chiefly responsible for reviving the utilization of a banned psychological test known only as "The Examination."  The notorious test was developed during the earliest days of psychological research but eventually outlawed due to the distressing effects it seemed to have on anyone who took it.
In The Examination, the subject is shown a series of four photographs taken over a century ago in the caves of Mt. Diablo by the explorer Gustuvas Nacht.  Viewed individually the photos appear quite mundane, but when placed side by side in a very specific arrangement, they reveal something ~ something extraordinary.
So extraordinary, in fact, that once the average subject gazes at the arrangement, they are suddenly struck with what can only be described as an overwhelming sense of terror - followed by a quick descent into writhing, gibbering psychosis.
However, it has been proven that certain individuals are able to view the arrangement with little or no ill effects.  The purpose of the test is to find those special individuals.
Dr Trepan and his assistant, Nurse Christina, have themselves never actually seen the pictures in the proper arrangement - they have never dared, having witnessed the unfortunate effects on the average subject, many of whom go on to reside permanently in the dank cellar of the Doctor's  private asylum, locked away and heavily guarded, due to their propensity for ferocious violence.