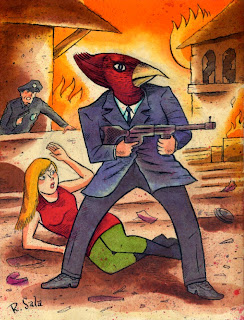 The Cardinal (aka SuperKiller DeathBird)  began his career as a regular superhero, fighting evil, but he grew weary of protecting citizens who, to him, seemed rather ungrateful for all of his efforts.

So he embarked instead on a never-ending spree of violent crime, without any apparent reason or goal other than destruction and murder.

The Cardinal is really Bob Beaker, the modern descendent of Leonardo DaVinci, who unknown to most scholars, was actually the world's first costumed superhero, The Birdman.  DaVinci's famous quote, "The gods create so that man may destroy" becomes The Cardinal's motto.

Also known as SuperKiller DeathBird (while in Japan), he is rarely seen without his trusty machine gun, which he calls "Woodpecker."
Posted by richard sala at 1:12 AM