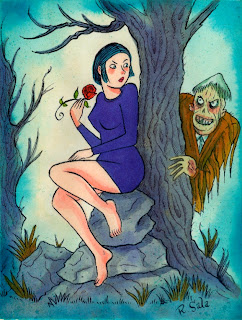 Little is known about Peculia, other than what the local gossips and busybodies say.  They say that although she appears to be a street urchin or waif, she actually lives in a big house behind tall iron gates and thick thorn bushes.
They say that she lives there all by herself, with only the company of a loyal (and remarkably resourceful) butler named Ambrose.

She can often be seen strolling through some of the more out-of-the-way villages that dot the hilly countryside, dreamily humming to herself and leaving bread crumbs for birds.

But some mutter darker things about her, saying she is bad luck, an ill omen and that trouble, heartache and death seem to follow her wherever she goes…

(See: PECULIA and PECULIA AND THE GROON GROVE VAMPIRES)
Posted by richard sala at 1:30 AM