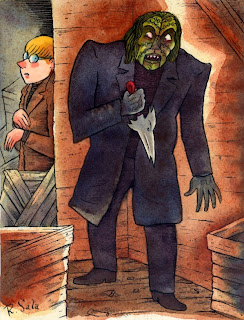 The true identity of The Gull Street Ghoul, the Bay Area's most notorious serial killer, has been a topic of lively debate among true crime scholars for many years.

Who was he?  Why did he commit such appalling crimes?  What did he do with the pieces of his victims he took with him - the hanks of hair and slices of skin?  What could be the story behind his unusually-shaped murder knife?  And what about the testimony of one surviving witness, who claimed The Ghoul wore a leather-like mask, possibly stitched together from human skin?  These questions remain unanswered, since The Ghoul was never captured.

However, now, almost thirty years after he vanished, The Gull Street Ghoul seems to have returned for a series of new murders.  Is it a "copycat killer" - or has the original Ghoul come out of retirement?  And why on earth do the victims of the new Ghoul murders all seem to be local astrologers or writers of newspaper horoscope columns?

Curious true crime aficionados are urged to visit The Ghoul Appreciation Society Headquarters (or G.A.S.H.), to learn more.  However, since G.A.S.H. happens to be located on a poorly lit, narrow street in the very neighborhood where the original killings took place, potential visitors are advised not to attempt to venture there after dark.