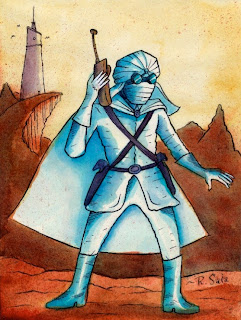 No one knows where to find him or how to reach him, but Obscurus is always actively (though rather moodily) keeping an eye on those who interest him, or who he is instructed to watch by "The Man On The Phone," (also known as Mr. Upstairs).

In his remote mountaintop tower, Obscurus has banks of video screens, radios and even a helpful robot or two - all assisting him in his furtive surveillance.

He has connections to the infamous (some say mythical) "school for weird kids", Reynardine, which is where he met former pupils Justine and Peculia.  Obscurus and Peculia became close, but had a falling out due to a misunderstanding, and have since become wary and mistrustful of each other.

Justine, who was jealous of their friendship and schemes to keep them apart, becomes Obscurus' assistant, although she is not exactly a model employee.   Obscurus knows he can't fully trust her, especially where her interaction with Peculia is concerned, since Justine makes no secret of the fact that she wouldn't mind seeing Peculia come to a sudden, sticky end.