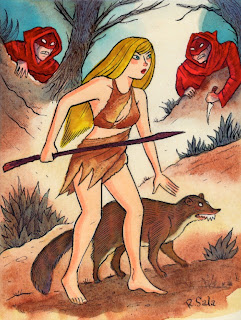 25. Kuna ~ The Wild Girl of Yosemite
A young runaway named Karla is camping in the giant, dense forests of Yosemite National Park when she stumbles onto a murderous moonlight ritual being performed by a coven of satanists.  In her flight from the pursuing killers, the young girl falls down a rocky hillside and hits her head, resulting in total amnesia.
The dazed and injured girl is discovered by an old survivalist hermit - a somewhat eccentric former park ranger, who has gone "off the grid" to live peacefully deep in the woods, unknown to park officials.  He nurses the girl back to health and takes a kind, fatherly interest in young Karla, who he names Kuna after the majestic Kuna Crest.  The girl can't remember anything before witnessing the murderous satanic ritual.  The hermit, who is also aware of the presence of devil-worshiping covens in the woods, teaches Kuna how to survive and defend herself.
When the satanists discover that the witness to their crime still lives, they murder the old hermit and Kuna finds herself on her own in the woods, with only her loyal companion, Gulo Gulo the wolverine, for company.
Meanwhile a friendly female park ranger, residing in an isolated station, has seen Kuna, but can't get her supervisors to believe her.  Park officials warn her she will be fired if she insists on reporting the existence of a wild girl in the forest.  The young ranger becomes obsessed with capturing Kuna herself.  The two engage in a cat and mouse game as adversaries before eventually being thrown together in mutual danger and, as a result, becoming friends.
Kuna has variety of adventures and often has to use her wits and survival skills to fight off wild creatures, blood-thirsty devil-worshipers and various rude and belligerent campers.