22. Professor Sovac ~ aka The Iguana ~ and The Brain of Cagliostro 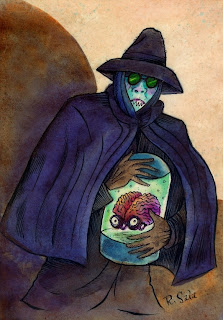 22. Professor Sovac ~ aka The Iguana ~ and The Brain of Cagliostro

While on a research expedition on a remote mountain village, Professor Egon Sovac discovers the ancient hiding place containing the living brain of the dark sorcerer Cagliostro.  The brain's powerful thoughts easily  overwhelm the professor who becomes a slave to the brain's evil desires and schemes.

Eventually, The Brain of Cagliostro succeeds in sucking all the personality and memory from the professor, turning him into an empty shell, a mere puppet doomed to do the brain's bidding.

Together they spend years traveling the endless Red Desert Valley in search of a cave that, legend has it, contains the doorway to another dimension.  Sovac survives the journey by eating insects and becomes known to local tribesmen as "The Iguana."

The pair eventually return to civilization. and the brain, more powerful than ever, embarks on a campaign of crime and terror.

They are finally defeated and captured due to the efforts of telekinetic teenager, Phillipa Knicely.  The two are confined to a single padded cell in an isolated asylum, which is tragically washed away when a nearby dam bursts, for reasons still being investigated.
Posted by richard sala at 1:25 AM