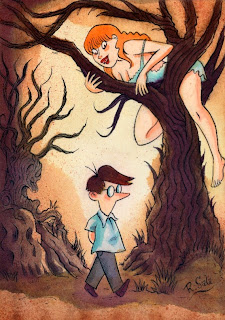 George is a curious youngster who tends to find himself in unusual and dangerous situations.  Though somewhat diminutive and unskilled in conversation, he is intelligent enough to make shrewd decisions when a crisis does arise.

When he finds himself trapped - alongside the local baby-sitters' club - by family of vampires, he also discovers that he can run a lot faster than he (or anyone else) ever thought he could!  George is able to survive his hair-raising night in the house of vampires with the help of gypsy matriarch Madame Rojo (who turns out to be an old-hand at vampire slaying) and the mysterious waif Peculia.

(See:  Peculia and the Groon Grove Vampires)
Posted by richard sala at 1:38 AM