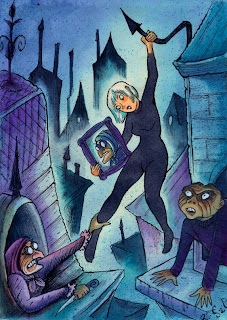 When her missing parents are declared dead, the infant Katherine Westree is taken to an orphanage which turns out to be a front for a gang of criminals known as The Obtainers.

The children of the orphanage are raised from infancy to be expert thieves, pickpockets and cat burglars. all under the watchful eye of the frightful and sadistic Mother Claude.

Eventually the orphanage is raided and the adolescent K. spends time in a reformatory, where she proves to be a model inmate, working as a counselor for the younger children.

Upon her release she accepts an invitation to visit the Bellsong Academy, a school for young ladies hidden deep in the woods of Northern California.  Once there she finds herself confronted with new mysteries -- and some old ones!  (See CAT BURGLAR BLACK)

Unusual physical characteristics:  Her hair turned white when she was twelve, a trait inherited from her father's side of the family.
Posted by richard sala at 1:43 AM