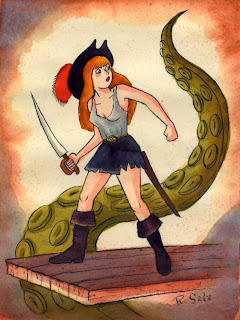 Bonnie Randell is a bright and enthusiastic student at Lone Mountain College, happy to have left her small town roots behind.  She plans on getting a degree in education because she loves kids - although she thinks she might like to do something with animals, too.

One night she is invited by a group of fellow co-eds to attend a meeting for young ladies who wish to "get in touch with their inner pirate."  Though it seems a bit of harmless fun at first, the meeting is actually a sinister trap set by a rather peculiar individual named Aunt Azalea - the cunning mastermind of a secret criminal organization operating out of the old Pirate Museum, located just off campus.

Before she knows whats happening, Bonnie finds herself locked up and facing various forms of psychological manipulation, mind-control, brain-washing and hypnosis.  Bonnie is indoctrinated into becoming the latest member of Aunt Azalea's pirate "crew," and like all members, she learns to follow Aunt Azalea's orders without question.

To her pirate crew, "Auntie", is a loving but stern mother figure who promises to care for them and love them if they do as they are told. Aunt Azalea names all the girls after "the flowers in my garden" - so Bonnie becomes Daffodil - and Bonnie Randell is no more.

Daffodil proves to be a model member of the crew, and soon, because of her natural enthusiasm and other singular skills, she is promoted to "Captain".

However, although the crew has been conditioned to perceive Aunt Azalea as kind and benevolent, the truth is that the fiendish crook has very little patience for failure.  And after Daffodil makes not one, but two errors on an assignment of extreme importance to Auntie, the unfortunate girl is lured into a dark room where, after "walking the plank," she has a deadly encounter with "The Occupant of the Well."