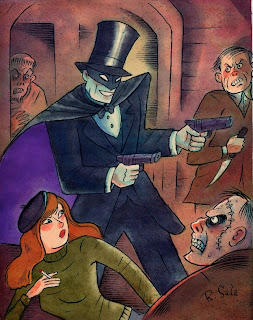 Those of you who have heard the name of Mr. Ixnay believe him to be a tall tale or urban myth, a bogeyman invented to frighten children.  But there is another world - an underground world of lowlifes, scoundrels and crooks - and to those people, he is terrifyingly real - a phantom avenger who has returned from hell, who appears out of nowhere and kills quickly and without mercy and who then vanishes in a puff of smoke to the echoes of hollow, mocking laughter.

The dwellers of the underworld know that, years ago,  a man named Aldo Ixnay was a founding member of the Global Association for Sabotage and Homicide (G.A.S.H. ) ~ a league of professional killers ~ and was both respected and feared.  They know that when he announced his intentions to leave G.A.S.H. and retire from the assassination game, the other members held a secret vote and conspired to do away with him.  But he proved a difficult person to kill.  Many attempts were made, and all failed, until he seemed to finally meet his doom in the spectacular Harrisville train wreck, an abominable act of G.A.S.H. sabotage.

But then, five years later, there were whispers that he was back, that he'd been seen lurking in alleyways, peering in windows.  No one really believed it, of course, ~ or at least not until the remaining members of G.A.S.H. were all suddenly sent to hell themselves in a single bloody night.