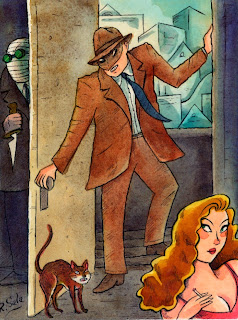 26. Mr. Murmur
On a street with no name sits a house with no number.  Inside, the enigmatic figure of the night known only as Mr. Murmur sits at his desk under a lone green lamp and sorts through a stack of mail.  The letters have been delivered to him through a variety of messengers or means (a one-eyed street dweller, a trained night jay, a special unmarked drop box located at the back of Dr. Erdling's Crime Museum) and each one is a request for his assistance.
To many, Mr. Murmur is a fairy tale, "twaddle" or "balderdash".  Some say he simply doesn't exist.  But to those who believe, and who are desperate enough to write to him, he is very real indeed!
He takes on those cases the police can't - or won't - solve.  He specializes in investigations that involve elements of the weird or uncanny.  He often merely observes, waiting patiently, allowing events to unfold and only intervening at the precise moment when he is needed.  He is the deus ex machina, swooping in suddenly, out of the shadows, to rain down justice or vengeance, and perhaps offer some hope to the hopeless.

Occasionally, special cases are sent his way by the elusive individual known only as "The Man on the Phone" or Mr. Upstairs.

Although the authorities will never admit it, Mr. Murmur is responsible for bringing down a number of evil-doers, fiends and creeps.  His rogues gallery of villains includes:  Captain Squab, the Pirate Emperor of Carnival Island;  Klorimandus, The Mad Mummy; Equinoxious, The Crocodile King; The Devil Damsels; Mongor, The Snow Gremlin; the murderous knife-throwing team of Eyeless Jack and Linda; the living head of Zolok, the mesmerist; and that inhuman creature responsible for "The Corkscrew Murders" known only as The Wheezer.