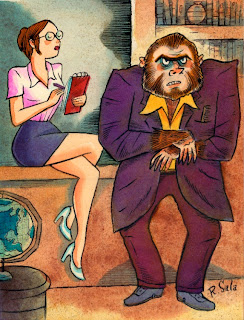 The hirsute gentleman named Mr. Warm is the director of a rather unusual club of aficionados dedicated to the study of the infamous Bay Area serial killer known as The Gull Street Ghoul.

The Ghoul Appreciation Society Headquarters (or G.A.S.H.) is located in an old victorian in the very neighborhood where The Ghoul once roamed the night streets and butchered a dozen victims.  There, members hold monthly meetings to discuss and debate all things Ghoul-related.  The G.A.S.H. library contains every book and article written about The Ghoul, who was never caught and whose identity  has been a topic of lively debate among true crime scholars for many years.

Present at all meetings, and indeed present whenever the director speaks, is faithful secretary Miss Honeymoon, who records any and all discussions, and is rarely seen without her memo pad and pen.

It should be noted that certain crackpot types, particularly someone who may or may not be the proprietor of Dr. Erdling's Crime Museum, another unique Bay Area landmark, have whispered some unsubstantiated and rather outlandish rumors about G.A.S.H. -- for example, insisting that those initials actually stand for the Global Association for Sabotage and Homicide and that Mr. Warm, Miss Honeymoon and other members of the club are actually a pack of ruthless assassins for hire, hiding in plain sight.

Luckily most average folks pay no attention to anything so ridiculous and get on with their lives and don't do anything to stir up trouble and mind their own damn business.

(See: THE CHUCKLING WHATSIT)
Posted by richard sala at 1:12 AM