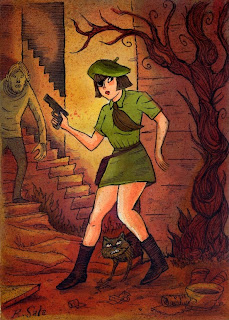 Mia Moray is one of a handful of agents who work for the shadowy figure of the night known as Mr. Ixnay ~ a former member of a network of global assassins who has now sworn to destroy it.

The daughter of Russian circus performers, she is Mr. Ixnay's most trusted agent, brave and loyal.

During the course of Ixnay's elaborate scheme to destroy his old assassins-for-hire organization, Mia finds she has a soft spot for their chosen patsy, a certain Mr. Broom, and she takes an interest in his welfare.  (See: THE CHUCKLING WHATSIT).

She has a rather heavy accent, which some might consider unfortunate, since she is occasionally called upon to deliver several pages of exposition in an attempt to help shed light on certain convoluted and bewildering scenarios!
Posted by richard sala at 1:44 AM