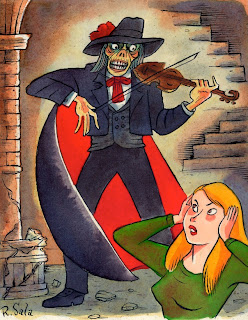 Inspired by his (unrequited) love for drama teacher, Miss Valentina, he helped raise community support and money for a Performing Arts Center that would benefit students as well as provide a place to stage his own operettas.  But jealous colleagues, the Principal and the Coach, frame him for embezzling the project's funds.  They also scheme to turn the Arts Center into a sports arena.

His dreams crushed, the disgraced and desperate teacher attempts to blow up the new building, but only succeeds in disfiguring himself when the bomb misfires.

Assumed to be dead, he stumbles into the underground labyrinths that wind under the town, connecting various buildings.  These tunnels allow him to come and go in secret, and - his former good nature now twisted by madness - he becomes Phantasmiac, embarking on a campaign of terror and destruction, seeking revenge for all of his disappointments.  Many Prom Nights and Community Theater productions have been marred by murder and mayhem caused by Phantasmiac!