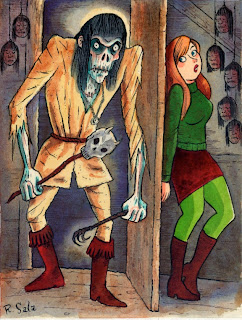 Quadrummando was once a scholarly explorer named Hector Cleeves.   He became lost in the jungles of Ecuador and stumbled upon the ancient ruins of a lost civilization where, inside a ruined stone temple, he discovered the secrets of life after death.

Living for months on jungle fruit and hallucinogenic plants, he learned how to use astral projection to explore the unseen corridors of reality. On the astral plane, he encountered the wandering spirit of a malevolent shaman whose mummified body was entombed in the ruins.   Their two spirits fused and were able to enter and reanimate the mummified body.

Eventually, a rescue party discovered the explorer in the jungle and he returned to civilization, bringing the mummy with him.  Once back home, he used his ability to inhabit the mummy to seek revenge on those he felt had wronged him.   His diabolical methods of murder included head-shrinking and the claw of a tropical jungle raven dipped in lethal curare.

He felt confident that no one would ever be able to discover his strange secrets and defeat him ~ but that was before he encountered Phillipa Knicely, the telekinetic teenager.
Posted by richard sala at 1:01 AM