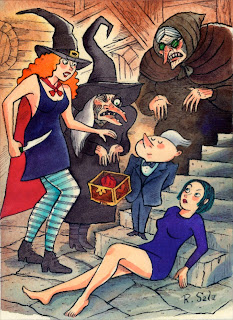 If you are ever lucky enough to have your very own butler, you couldn't hope for a better one than Ambrose.  Ambrose is Peculia's butler, although she can't quite remember how that happened.  He was just always there, living in his own private quarters in the big, secluded house she inherited when she was just a kid.

Peculia was always a curious child, especially when she was younger, but Ambrose, for the most part, demurely refused to discuss himself.  All Peculia knows for certain about Ambrose is that he was loyal member of her family's staff for many years ~ and that they had arranged for him to look after her when they were gone.

When she was a student at Reynardine, she spent most of her time there.  But her final year at that school was an unhappy one so she was glad to return to the big old house and live on her own ~ all alone, except for Ambrose.

A good butler is discreet and never intrudes where he isn't needed.  But at the same time, he ought to be able to recognize when his mistress could use a helping hand.  And in fact, Ambrose seems to have a sixth sense  for knowing when his mistress might benefit from his presence.

For example, there was that time Peculia had wandered into a new grocery store called The Three Sisters ~ and before she knew it, she had been taken prisoner by the eponymous proprietors who planned to cut her up and eat her!  Things looked pretty grim, because these three evil sisters practiced black magic and could not be killed in any ordinary way.  They shared a single enchanted heart which was locked safely away in an iron box in some far off tower - and none of them could die as long as that heart was protected.

Now, Peculia is clever and most likely could have extricated herself from the awful situation on her own.  But she was glad nevertheless when Ambrose showed up unexpectedly and ~ well, he really is the perfect butler.