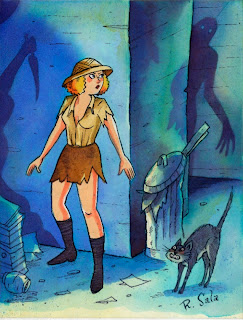 On an assignment for the city's leading newspaper, The Guardian, writer Arthur Broom meets Abigail when he finds her inside the apartment of murder victim Cyril Root,  rifling through the dead man's  belongings.

Abigail convinces Broom not to report her illegal activities. She tells him that she is a student and research assistant at Lone Mountain College, and that she has been hired by a former professor to research the life of an "outsider artist" named Emile Jarnac.  The late Cyril Root had written about Jarnac, and had been working on a book about him when he was murdered.  Abigail is anxious to find Root's unpublished manuscript, because her employer pays very generously for success.  Broom agrees to help Abigail look for the manuscript.

But is Abigail telling Broom the whole truth?  Or will Broom's involvement with her put them both on a path leading down into some very dark territory, where an inhuman, sadistic killer known as The Gull Street Ghoul waits for them?

(See: THE CHUCKLING WHATSIT)
Posted by richard sala at 1:11 AM