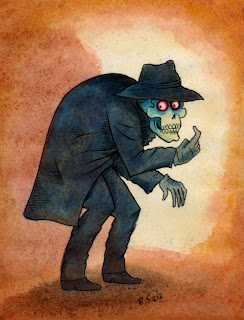 No one knows where he comes from or where he'll show up next, but apparently he's been around for a long time and is to blame for all manner of trouble and problems.   Attempts to capture or kill him have been unsuccessful, so he remains on the loose and citizens are cautioned about approaching him or attempting to engage him in conversation.

It is considered an ill omen or "bad luck" to see him.  If you catch a glimpse of him standing in your headlights on a lonely country road or if you turn the corner in an old abandoned building and can make out his figure standing at the end of the hall, smiling at you, it is advised that you, as a precaution, quickly turn around and go the other way.

Beware especially if he removes his gloves, revealing his bony hands.  Anyone he touches will suddenly glow an unearthly shade of green, then burst into a ball of fire, leaving only scattered bones, ashes and shreds of clothing where a person used to be.