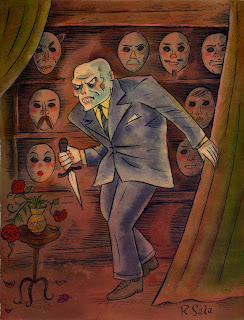 The loathsome creature known only as "The Twinge" is a notorious fiend, a mysterious demented super crook who haunts the city nights.
He is a master of disguise, and a twisted romantic who often leaves dead flowers at the scene of his crimes.

After one of his most notorious murder sprees ~ eliminating a number of local art critics ~ he mysteriously vanishes.  But is he really gone ~ or merely in hiding, waiting for the right moment to strike?

A woman known as Penelope X claims to have met The Twinge and writes several paperback romances which portray him as a rather dashing and heroic figure, resulting in ladies everywhere swooning at the mention of his name.

(See: The End Of The Street in the book MANIAC KILLER STRIKES AGAIN)
Posted by richard sala at 1:29 AM