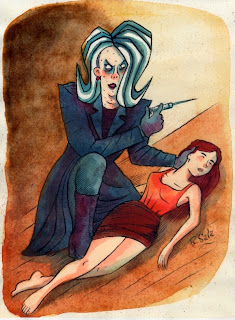 Ms. Moss is a member of the Science Faculty at Lone Mountain College.

She led a rather colorless and uneventful life until she became acquainted with the work of Massimo Ibex, after which things changed dramatically.

Although considered harsh when it comes to grading her classes, she is nevertheless well-liked by her students, especially those she sees something "special" in.  Occasionally, she will invite one of her lucky pupils for a private tour of an old, condemned building on campus where ancient occult rituals may or may not be secretly performed.